Love your gut, Balance your hormones 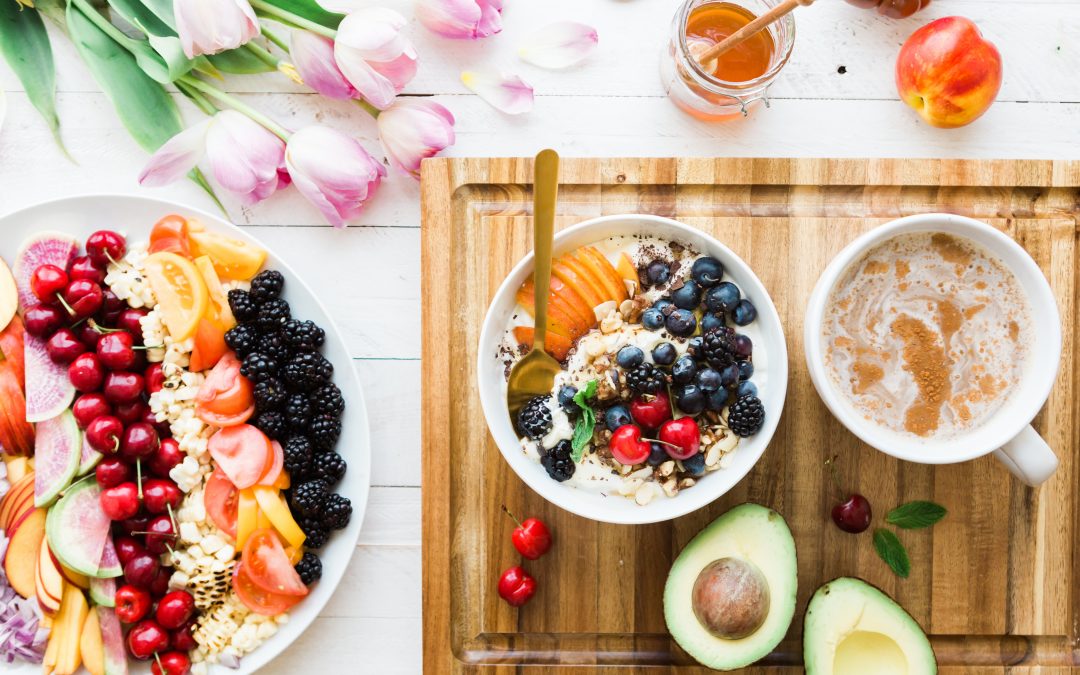 LOVE YOUR GUT, BALANCE YOUR HORMONES

Long before science wrapped its collective head around the importance of the gut, common culture was already aware that there was something special about the most distal section of the intestinal tract.  Sayings like “trust your gut” and “gut feeling” are ubiquitous and for good reason.  It turns out that the gut is not only important for decision-making due to its relationship to the nervous system, but the gut acts directly to regulate hormone balance as well.  Within the body there are microorganisms such as bacteria, virus, and fungi living in almost every nook and cranny.

Research surrounding the vital role of the gut has grown immensely within the last two decades and there are still many questions to be answered.  However, scientists have found a relationship between the diversity and quantity of microbial species and neurological health, inflammatory diseases, hormone balance, detoxification, and beyond.  In fact, this collection of tiny organisms is now considered an “organ” in many scientific circles, validating its importance to our health and wellbeing.

The Link between Gut and Hormone Balance

Hormones are chemical messengers throughout the body that are produced within the endocrine system.  Hormones are responsible for regulation of stress-regulation, sleep, mood and mental health, growth, reproduction, and more.  It turns out that the microbiome not only has a regulating role in hormone balance, but microbes are actually able to produce hormones such as epinephrine, dopamine, serotonin and GABA (1).

The microbiome regulates delicate sex hormone balance by activating estrogen.  The collective microorganisms affecting estrogen metabolism are so important that they are now referred to as the “Estrobolome”.  The estrobolome are responsible for producing an enzyme, ?-glucuronidase, which modulates estrogen into an active form allowing it to bind to cells throughout the body and do its job as a hormone.  When the gut flora is imbalanced, also referred to as dysbiosis, circulating estrogen levels are influenced.  Imbalanced levels of circulating active and inactive estrogen are linked to the diseases and conditions presented in the diagram below (2).  It is important to remember that disease happens progressively so early symptoms of estrogen imbalance may be red flags that the body is moving towards a more serious disease state.  Dr. Amy Shaw, a physician specializing in inflammation warns that hormone imbalance, inflammation and the gut are interrelated and that inflammation such as pain, fatigue, brain fog, or conditions like eczema or psoriasis can be a sign that your hormones are out of whack!

Researchers now think that the gut may be directly linked to the risk of breast cancer.   One recent study found that postmenopausal women with higher levels of microbe diversity had healthier ratios of estrogens associated with a decreased risk of breast cancer (3).  Researchers believe that the gut is responsible for modulating dangerous estrogens and when the gut is unhealthy, it is not capable of keeping up with the demand for biotransformation of estrogens which should be funneled out of the body.

Testosterone may be protective for the gut.  One study found that sex hormone levels directly affected the microbiome which, in turn, directly affected risk of autoimmune disease (4).  Researchers found that subjects with higher levels of testosterone experienced reduced risk of autoimmunity, explaining why women have a higher risk of developing an autoimmune disease.  In animal studies, when researchers increased the levels of testosterone, the risk of Type 1 Diabetes declined significantly.  This research supports the notion that when triggering events such as stress or poor diet reduce the function of the microbiome to regulate hormone balance, a person is at higher risk for autoimmune disease development. 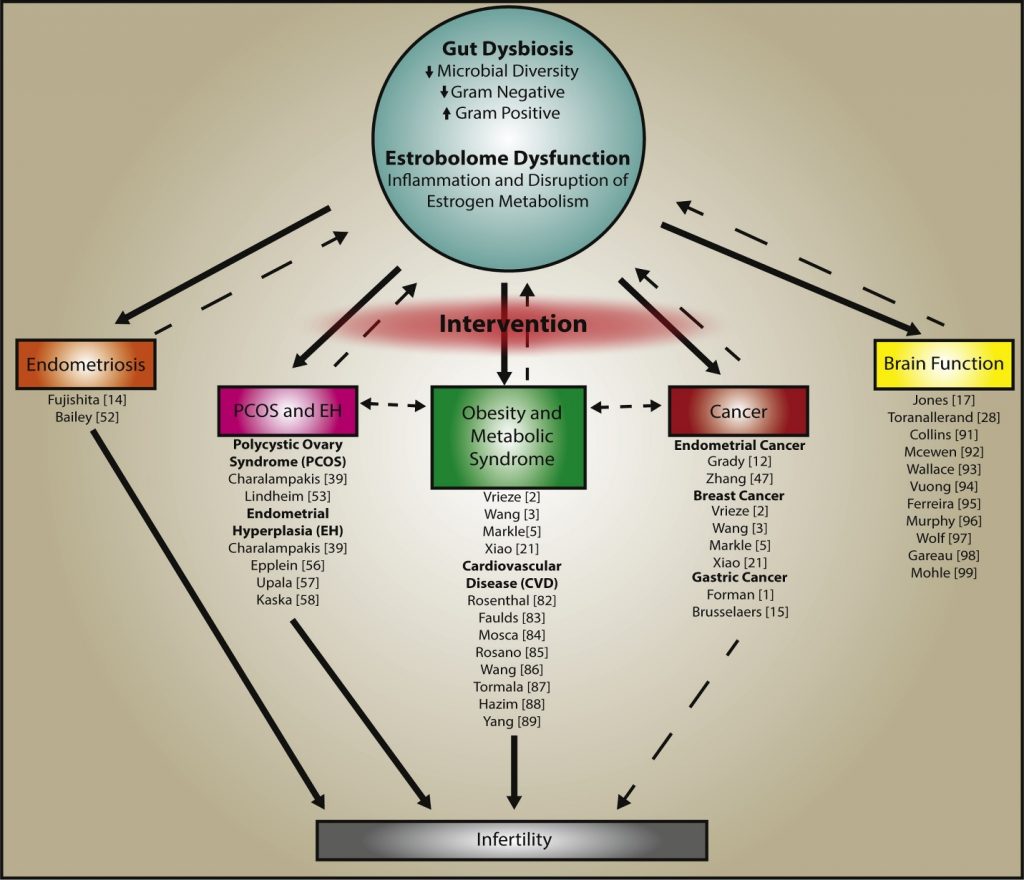 The health of the gut is largely reliant upon lifestyle factors, but the foundation of the gut is planted at birth.  The microbiome is originally passed from mother to child in the birth canal and then via breast-feeding.  Many experts in this field agree that people are at a higher risk of imbalanced gut flora if they were born via C-section and/or not breast-fed because in those cases the colonization of the gut occurs from foreign microbes in the environment instead of from the mother (5).  Chris Kresser explains, in his series focused on natural versus Cesarean childbirth, that people born via C-section are higher risk for conditions and diseases associated with gut health, including hormone imbalance.  This is not “game-over” but it can put a person at a disadvantage causing them to have to work harder for proper gut health (6).

Another major factor in gut health is the use of antibiotics throughout life which has a direct impact on diminished diversity and healthy colony size (7).  Antibiotics wipe out dangerous bacteria that can cause us to feel ill, but the same antibiotics wipe out the healthy bacteria as well.  Research shows that it can take months and even years to replenish with great attention to the gut.

Aside from early childhood and antibiotic use, daily lifestyle choices have a consistent and vital role in hormone balance and maintaining gut health.  Diet, exercise, stress, and sleep affect the wellbeing of the gut and therefore the wellbeing of the body and mind.  The image below beautifully diagrams the effect of lifestyle on hormone production and the effect on the gut health.  Making “gut care” a lifestyle is the most effective way to balance hormones and maintain overall health.

A step by step guide to improving your hormones by improving the health of your gut!

Caring for the little critters in your colon is much like caring for a garden.  In fact, in the world of functional medicine, physicians refer to the healing of the gut as “Weed, Seed and Feed”.

Weeding may be necessary if you have an overgrowth of unhealthy microorganisms that need a more direct approach.  A knowledgeable naturopath or functional medicine physician can support your healing. Natural antimicrobials can wipe out unhealthy bacteria while mitigating additional damage to your system and preserving much of the healthy microbial community.  However, be very cautious if self-directing this phase of gut restoration because many natural antimicrobials are as dangerous as antibiotics.

An important note about the “Weed, Seed and Feed” protocol is that if you are suffering from symptoms related to gut dysbiosis such as autoimmune disorder, serious food sensitivity, hormone imbalance, fog brain, chronic fatigue, fibromyalgia, poor digestion, constipation or chronic pain, it is best to work with a trained professional.  In these cases, it may be counterproductive to utilize all stages of the protocol collectively.

However, for general health and wellbeing, “Weed, Seed and Feed” practices can all be part of a daily regimen.  Eating foods such as garlic or drinking green tea will help to keep unhealthy bacteria at bay alongside a healthy, whole food diet.  Including probiotics and prebiotic foods daily will encourage the good flora to grow.  Don’t forget to manage stress and make time to work up a sweat. Implementing all of these practices as much as possible will give your gut the tools it needs to keep you balanced and living with optimal vitality! 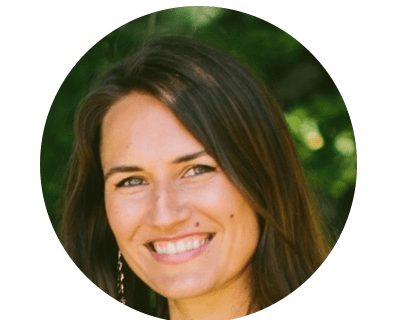 She earned a B.S. in Dietetics from Kansas State University and an M.S. in Nutrition and Functional Medicine from University of Western States. She is also a Certified Yoga Instructor. As owner of Pep Wellness, a nutrition coaching and consulting business, Megan’s passion lies in sharing her love of food, wellness, and science through writing and working directly with clients to help them connect with their bodies & achieve optimal health. 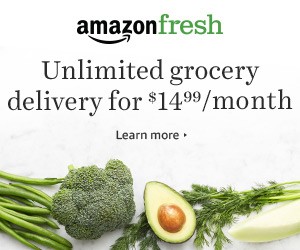 Sign up to get the latest health & wellness news 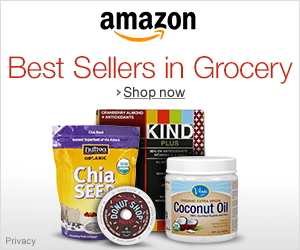 Our mission is to play a part in helping women feel and be the best version of themselves through use of natural remedies. Claim back the unique, confident and full of energy YOU. We can proudly guarantee that all our products are free from harmful chemicals and artificial fragrance.

Our mission is to play a part in helping women feel and be the best version of themselves through use of natural remedies. Claim back the unique, confident and full of energy YOU. We can proudly guarantee that all our products are free from harmful chemicals and artificial fragrance.